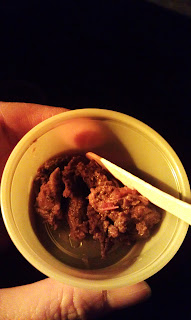 I went to a fascinating lecture titled "Strange Meat" this week hosted by the always enlightening Brooklyn Brainery.

Here's what I learned. There's a world of strange meat out there. But 'strange' is relative. Case in point: when Charles Dickens made his first visit to the US in 1842, he was a minor superstar and heart throb. The grand City Hotel in NYC threw a lavish dinner in his honor. The third course of the sumptuous menu included roast bear. Bear was a common meat in the 1800s. Who would think of eating bear now?

For that matter, who would eat fermented, rancid shark meat? Or feast on moose muffle, the bit between the nose and overhanging upper lip? Or drink snake wine (with a cobra in the bottle, not a measly worm)? What famous French president wanted his final meal to be a fragile songbird, a delicacy now outlawed?

During the event, we naturally got to sample Strange Meat. My friend Yasmin took the above photo, prompting me to ask on Facebook if people could name the meat. The responses were impressive: moose face, Rocky Mountain oysters, horse, Soylent Green (clever), groundhog, wild boar, elk, squirrel, sloth, porcupine and hyena. It was actually beaver.

It had been slow cooked and the meat was the consistency of pulled pork. But it tasted tinny, like canned beef. So there. I've now tasted beaver.

The next Masters of Social Gastronomy Series lecture will be on candy. Let's see what disturbing facts we'll uncover there.
Posted by KikaEats at 6:24 AM