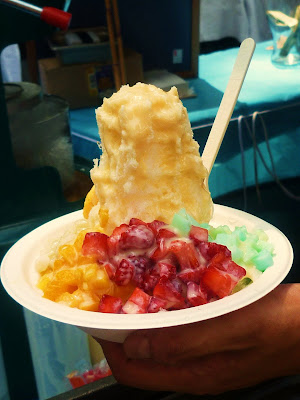 Speaking of ice, The Shaved Ice Factory was creating quite a stir with its mile high signature treat ($6). It's a mountain of shaved ice, drizzled with condensed milk, and a variety of popular Asian toppings including sweetened red beans, coconut jelly and fruit.

It's eye catching for sure. Not sure if my taste buds were up for it just yet. A NY Times photographer was busy shooting the sundaes on a recent Saturday. Let's see if the Taiwanese treat catches on.

I opted for something savory to start. That meant a fine brisket taco ($4) and Mexican corn rolled in cotija cheese ($3) from Brooklyn Taco. That's the taco in Time Out's recent best 26 tacos in NYC. It's goooood. So's the corn. If all goes as planned, BK Taco will soon be a permanent fixture in nearby Essex Market.

The excellent empanadas ($3.50) from La Sonrisa are back again this year. It's exciting to see new temptations in the mix too. Standouts included Mighty Balls meatballs (and veggieballs), La Newyorkina fruity ice pops ($3) and Melt Bakery's red velvet whoopie pies ($4). 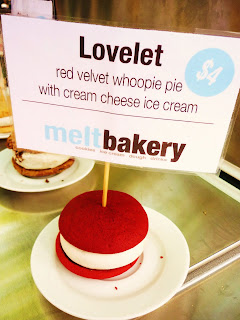 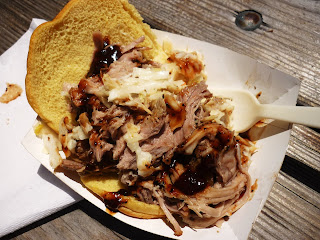 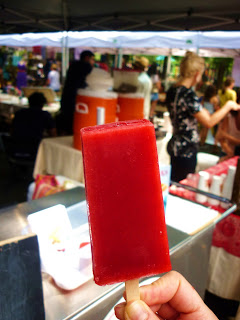 I loved meeting Mackenzie Smith of Herbin' Spoonful. She transformed her love of caramel into a handmade line of luscious sauce infused with herbs and spices like lavender and habanero. Ingenious. And she happily offers tastes.


What I really admire about the fair is that it's succeeding in being part of the community. It's surrounded by a buzzing playground, tennis courts and even a little lawn for relaxed picnicking. It fits right in without overwhelming. And the carefully curated offerings - edible and otherwise - make you yearn for Saturday even more now. There's even a ping-pong table.
Corner of Hester St + Essex, LES
Saturdays 10 am - 6 pm through October 2011
Posted by KikaEats at 8:02 AM No comments:

Coney Island just unveiled its much needed makeover. The rides look glossier and more death defying. Plus its boardwalk was just named #2 in the nation by National Geographic. Still when it comes to boardwalk snacks, the best is an oldie but goodie: mango-on-a-stick.

Find the roving 'mango cart' on the boardwalk and watch the skilled woman transform the perfectly ripe fruit into a flowering blossom in seconds. I douse mine in hot sauce and pico de gallo spice, Mexican-style. It's really, really messy. That's the best part.

The Burger Joint: One Messy Classic

The last place you'd expect to find a greasy burger joint, not to mention one of the city's finest, is in the lobby of chic Le Parker Meridien hotel in Midtown. But that's what makes this odd couple work beautifully.

Only in New York.
Walk through the hotel's glass front entrance and follow the scent of grilled meat to The Burger Joint. You won't have to go far and you won't see any signage.


Continue just past reception and take a left down the tiny hallway flanked by a set of floor length velvet curtains. Look for the beckoning neon burger on the far wall. And step inside a not-so-secret little NYC burger institution.
The menu is very limited and step-by-step ordering instructions marked on the wall are Soup Naziesque. Better know what you want before ordering. Burgers, fries, sodas, beer and shakes. Not so complicated.


The cheese burger with 'the works' ($7.35) is one hot greasy mess. But it goes down oh so good. Its dense, juicy beef patty is sandwiched between the standard pickles, onions, tomatoes, mayo. The fat is already seeping through the paper wrapper with your first bite.
Fries ($3.67) are hot and crispy. Shakes ($5.05) are thick and creamy.


Movie posters, framed reviews and graffiti all adorn the booth-lined walls. Music is blaring. Burgers are sizzling. And there is always a line. So order, eat, and scram. But you'll be glad you did.

The first time I tried Indian Chinese cuisine was in Bangalore, India, and I knew I was hooked. The next time I tried it was at Dalchini in South London. So when I discovered the rare hybrid cuisine in NYC at Tangra Masala in Queens, I was elated.

Often known as Hakka cuisine, the cooking style was developed by Chinese settlers in India, blending Chinese styled cooking with Indian ingredients. So expect to taste cumin, turmeric, ginger, garlic, yogurt, and of course, hot chilis. It's the most popular cuisine in India. I will start the campaigning for New York.

Don't judge Tangra Masala by its unassuming looks. You come here for the good eats as I recently did with my Ramen + Friends mates. Its tiny 42-seat dining room was full all night.

Everyone apparently orders the famous lolly pop chicken ($6.95), six tantalizingly spicy drumsticks smothered in a paste of ginger, garlic, chili and coriander and deep fried. The results are perfect. Crispy, flavorful bites served with a spicy mayo. I should have ordered a second...

Much of the menu is designated as 'hot + spicy,' which is my weakness. I can't get enough. But if you fancy a mild dish, there is still plenty to choose from for meat eaters and vegetarians alike.

I opt for some of the Tangra classics. These runny nose, watery eye-inducing options don't disappoint. The Tangra masala chicken ($9.95) is not for the faint of heart. Fiery red means fiery hot, and the dish come either 'dry' or with 'gravy' (sauce). We ordered the 'dry' which was anything but (as a rule, I prefer dry). Moist, meaty chunks are coated in loads of scallion, ginger, garlic and chili. And the Manchurian tiger prawns ($13.95) are bold, spicy and succulent.

Super friendly owners Peter and Ina Lo, originally from Calcutta, India, have been running the budget friendly eatery since 2000. They also run a second, much larger branch called Tangra Asian Fusion in Sunnyside.

No alcohol is served, but you'll be craving lots of water to cool down anyway. That is before you dig in for more.

Posted by KikaEats at 8:08 AM No comments:

Calling all cheese lovers. Ever wonder why some cheese is so stinky but still tastes mild and sublime? Or whether any local cheese farms have storefronts in Manhattan? Or just looking for an excuse to eat more cheese? Then the Institute of Culinary Education has a walking tour for you.

Led by local cookbook author and culinary historian Alexandra Leaf, 'A Cheese Lover's Romp' this past weekend was a 4+ hour tour through the West Village and Soho where we sampled everything from freshly made mozzarella (still warm) to velvety Fourme d'Ambert, one of France's oldest blue cheeses dating back to Roman times. 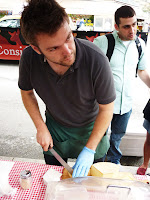 As we sampled away, we also learned the basics of types, terrior, storing, and serving methods.

Next up was the Abingdon Square farmers market stand of Consider Bardwell, a charmingly named Vermont farm, whose award-winning handmade cheeses work with the seasons.

Try the Mettowee fresh goat cheese - mild and cream cheese-like, available now through October. Look out for Bardwell stands at the city's many farmers markets, or at some of the country's finest restaurants including Per Se and Napa Valley's French Laundry.

Tiny Joe's Dairy on Sullivan St. was easy to miss until we tasted the handmade fresh mozzarella made before our eyes. Soft, creamy and unforgettable. And a walk back in time.

Valley Shepherd Creamery, also on Sullivan St., is new to the neighborhood. The NJ-based farm recently opened up its first city store in Soho and sells a variety of artisanal cheeses from its 700 sheep, cows and goats. It also sells yogurt, gourmet products and pour-it-yourself olive oil. Sign up for cheese making classes at the creamery.

I fell in love with the Nettlesome, flecked with bits of nettle, giving it a slightly pungent taste, and perfect for grilled cheese sandwiches.


A few doors down, our final stop was newcomer Ba'al Cafe + Falafel for its feta and basil flatbread drizzled with olive oil. Delicious!
We left in a cheese coma and a sense of pride in the amazing quality of American artisanal cheese today.

Posted by KikaEats at 8:05 AM No comments: 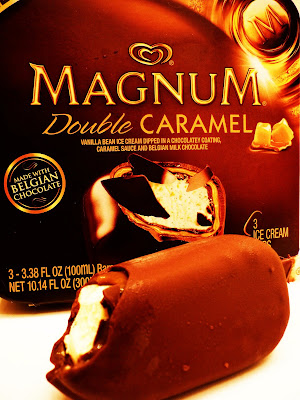 Looking for a sweet treat to temper the summer heat?

March straight into your local Walgreens for the debut of Magnum premium ice cream bars, an import from Anglo-Dutch giant Unilever. While living in London, these bars were my go-to when indulging in something especially naughty-but-worth-every-calorie. They're already available in 40 countries, so not sure why the US is the last to know. Probably because we don't need more fat laden products, but never mind. I'm in heaven now.

So far just six flavors including chocolate covered vanilla (classic), caramel (slightly too rich and sweet) and almond (my absolute favorite), are available at area retailers including Target. Til now, I've only been able to find the caramel in lower Manhattan.

Think of it as a Dove bar but better. The rich vanilla ice cream is flecked with visible vanilla bean. The Belgian chocolate coating is thick and snaps when you bite into it. Skip the calorie counting (around 330 per bar) and just surrender.

Note: I happily paid for my ice cream; this post is not based on a company freebie whatsoever.
Posted by KikaEats at 7:20 AM 1 comment:


'Tis the season of sprawling city beer gardens, but not everyone wants to elbow their way through the masses for a table with a view. Tucked away on a quiet block in Kips Bay by the East River, Tom Colicchio's Riverpark just opened its terrace, a 72-seat outdoor urban oasis, adjacent to the restaurant.

Add some friends, music, sleek communal tables, and a pitcher of Harpoon ($18), and that makes one fine summertime happy hour. You'll quickly forget the racing street traffic below.

Posted by KikaEats at 3:43 PM No comments: