Hung Ry takes the humble noodle shop and elevates it to a sophisticated level without a hint of too-cool-for-school attitude.

In fact, the first thing that struck me by this new addition to the Bowery's string of vibrant eateries was the warm, friendly greeting. The next was a packed dining room of eaters young and old - all in a chic industrial space softened by candlelight. I love that.

The modest menu of organic hand pulled noodles shines with inventive flavor combos. It changes nearly daily with such striking ingredients as quince, hen of the woods mushrooms and charred tamarind. Can they really make a soup of oxtail, brisket, rutabaga and sour cherries work? You betcha. Generous hunks of tender oxtail taste delicious with cherries plumped by a rich, complex broth.

The veal cheek, liver and marrow medley is perfectly cooked, mellow marrow balanced by fresh and firm offal, with a surprise crunch of whole macadamia nuts. Again, it all works!
The beautiful lobster comes in a delicate broth and gets its pleasant bite from sunchokes and hen of the woods. Don't miss the fried squid with guajillo and pumpkin seeds to start. You can probably skip the starter combo of monkfish liver with logan berry and hen of the woods. It was fishy, sweet and odd.
At the end of your meal, if there is room for something sweet, the pink grapefruit sorbet is light and refreshing.
On a bitter winter night, Hung Ry offers a warm bowlful of happiness.
55 Bond St (Bowery + Lafayette)
Tues - Sun 12-3 pm and 6-11 pm, closed Mondays
212 677 4864
Reservations accepted
Noodle soups range from $12-19

Few activities could lure me out of my toasty East Village apartment on the coldest day of the year. Kimchi making class at the Brooklyn Brainery happens to be one of them.

And in the dead of winter, when I'm told kimchi is a powerful food to ward off colds, what better way to spend a Sunday afternoon.


Clearly I wasn't the only one. The Brainery was packed when I arrived. So packed I could barely open the front door. Kimchi lovers unite! Single file we snaked our way around the assembly line of ingredients as Brainery co-founder Jonathan Soma talked us through the finer points of the fermentation process, which creates a good bacteria, making it one of the world's healthiest foods.

Following a basic recipe projected on a large screen, and armed with a big metal prep bowl, we "students" made our way around the ingredient stations: shredded Korean radish and carrots, sliced scallions, fish sauce, ginger and garlic pastes, sweet rice porridge, Korean pepper flakes, and salted cabbage. Mix well, very well. Place in a glass container. Take home. Leave on the counter for 2 days of so until the salt releases the liquids. And place in the fridge to eat.

I am no kimchi expert. I just know I haven't met a version of Koreans' national side dish I didn't like. It even made international headlines last October as skyrocketing Napa cabbage prices in South Korea caused a serious national kimchi shortage.

While in line at class today, I overheard a guy musing about how nice it would be if kimchi became as common as hummus in US grocery stores. Couldn't agree more.

This is just a sample guide.


1 tsp garlic
1 tsp ginger
¼ cup shredded radish
2 tbl shredded carrot
3 tbl green onion
4 tbl sweet rice porridge
1 tbl onion paste
1 tbl fish sauce
1-3 tbl Korean red pepper flakes
1 ½ cups cabbage
Kimchi Technique:  With any kimchi recipe, there are three steps.
1: Brining
After you cut up your cabbage, you need to salt it to draw out the water and do some magic on the texture and flavor.
Method 1: Mix 1 cup of salt into the cut-up cabbage for every 10 pounds of cabbage. Let sit for 1 ½ hours, mixing every half hour.
Method 2: Mix 2 cups water with ½ cup salt for every pound of cabbage. Cut the cabbages into quarte­rs, sprinkle salt on the stems, and submerge them in the salty water for 4-5 hours.
2: Mixing
Mix together everything except your cabbage.
Tip: The more finely you mince your garlic and ginger, the better the end product will be. If you can get it paste-like with the help of a food processor you’re in good shape! Now mix it up with your cabbage.
3: Fermenting
While you can eat your kimchi right away, it doesn’t get awesome until it’s started to ferment. Fermentation happens when little friendly bacteria work their way through the sugars, turning them into acids and CO2.. This is what makes kimchi taste sour.
How do you ferment? Just leave your kimchi alone and they’ll get started without you. It happens a lot more quickly on the countertop than in the fridge – I like to set my kimchi on a table in the kitchen for a couple days before I move it into the fridge. Don’t worry about it spoiling – the good bacteria have all sorts of methods they use to keep everything clean. If you notice a little white scum on top, scoop it off before you put it in the fridge. Once it’s been around for 3-4 weeks, it’s probably gotten to the point where it’s pretty sour and a good candidate for kimchi stew!
Posted by KikaEats at 8:26 AM 4 comments:

Don't Buy This at Trader Joe's 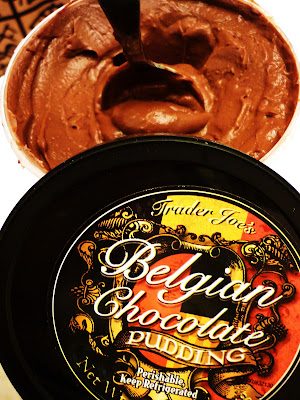 Warning to chocolate lovers: read at your own risk.

Impossibly thick, rich, and dangerously delectable. Tastes of real chocolate. No icky fake aftertaste. One spoonful is never enough.  I warned you. I am addicted. Apologies if it rubs off. Trader Joe's Belgian Chocolate Pudding. $3.49/16 oz.
Posted by KikaEats at 7:40 AM 1 comment:

The Ultimate Pig Out

Move over, suckling pig feasts. Here comes sam gyup sal. What?, you say. Pay attention: this popular Korean classic literally translates to sam (three), gyup (layered) sal (flesh) - or to us Americans: pork belly. Thick slabs are grilled table side, served wrapped in lettuce parcels and accompanied by a grilled trio of kimchi, sliced garlic and bean sprouts. Add to that pickled jalapenos, radishes, bean paste sauce and crown with one single peppercorn. Then just wait for the flavor explosion to burst in your mouth. It's incredible.
﻿
﻿ For the real deal, take the LIRR to Tong Sam Gyup Goo Ee Korean restaurant in Flushing. Just look for the three little piggies in the window, across the street from the Broadway train station. Nothing but pork is on the menu. I quiver in anticipation.


Serious patience is required over the next 15 minutes, as you watch your server carefully grill your meal. The pork, placed at the top of a dome shaped grill, pops and sizzles, releasing that comforting aroma and succulent juices, which drip down to flavor the kimchi and sprouts. Bacon fat just makes everything taste better. While you build your appetite waiting, you do get a flavorful vegetable broth, cleansing your palate for the feast ahead.
Our server spoke little English but happily demonstrated how to prepare our lettuce  wrapped meaty parcels. Grab some extra napkins and get busy.

Just as you begin to slow down is when Act II perks you up again. Ask for "rice" near the end of your meal, and, for a few extra dollars, your server will smear any remaining morsels of crisp pork and veggies with a thick layer of seasoned rice and nori. Left to grill and absorb the pork drippings, the resulting bibimbap is yet another
sheer delicacy. Filling without making you want to explode, the meal is a relative bargain at around $30/head. Time to round up your pork loving posse.