The early word on the bird: it's all good. It better be after waiting in a line that snaked around Second Ave. for two hours tonight. The Bromberg Bros. are getting the final kinks out of the system before officially opening the doors of Blue Ribbon Fried Chicken to the public. Maybe this weekend, maybe next week. It just depends on when they think the staff is ready to handle the crush of crowds once they hit 'send.'

Judging from the frenzied online chatter, hoards of fans will be hitting the E. Village for the high-end chain's first chicken-only spin off. It's by the subway and it's open til 2am. Tonight the food was free. Here are the highlights: 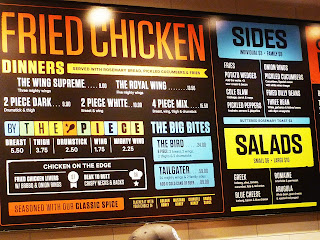 ﻿﻿
Fried chicken dinners come in a variety of combos or by the piece. The chicken is moist and juicy on the inside, and coated in the signature thick matzo meal crust. The crust is only lightly seasoned and definitely benefits from the flavor boost of honey-based sauces scattered on the tables. Combos come with a crisp cucumber salad and pencil thin fries. The hefty chicken burgers look tantalizing - and feedback from other diners confirmed it.

Sides and salads don't disappoint. The fried dilly beans - pickled, deep fried green beans - have a sour tang that grows on you. And the blue cheese, bacon topped iceberg wedge makes a sinful side salad.

There are other special menu grabbers like Mexican Sprite and Coke. And for dessert, check out the ice creams in creative combos. Carrot and habanero, anyone?
28 E 1st Street @ Second Ave.
212 228 0404
Posted by KikaEats at 11:49 PM